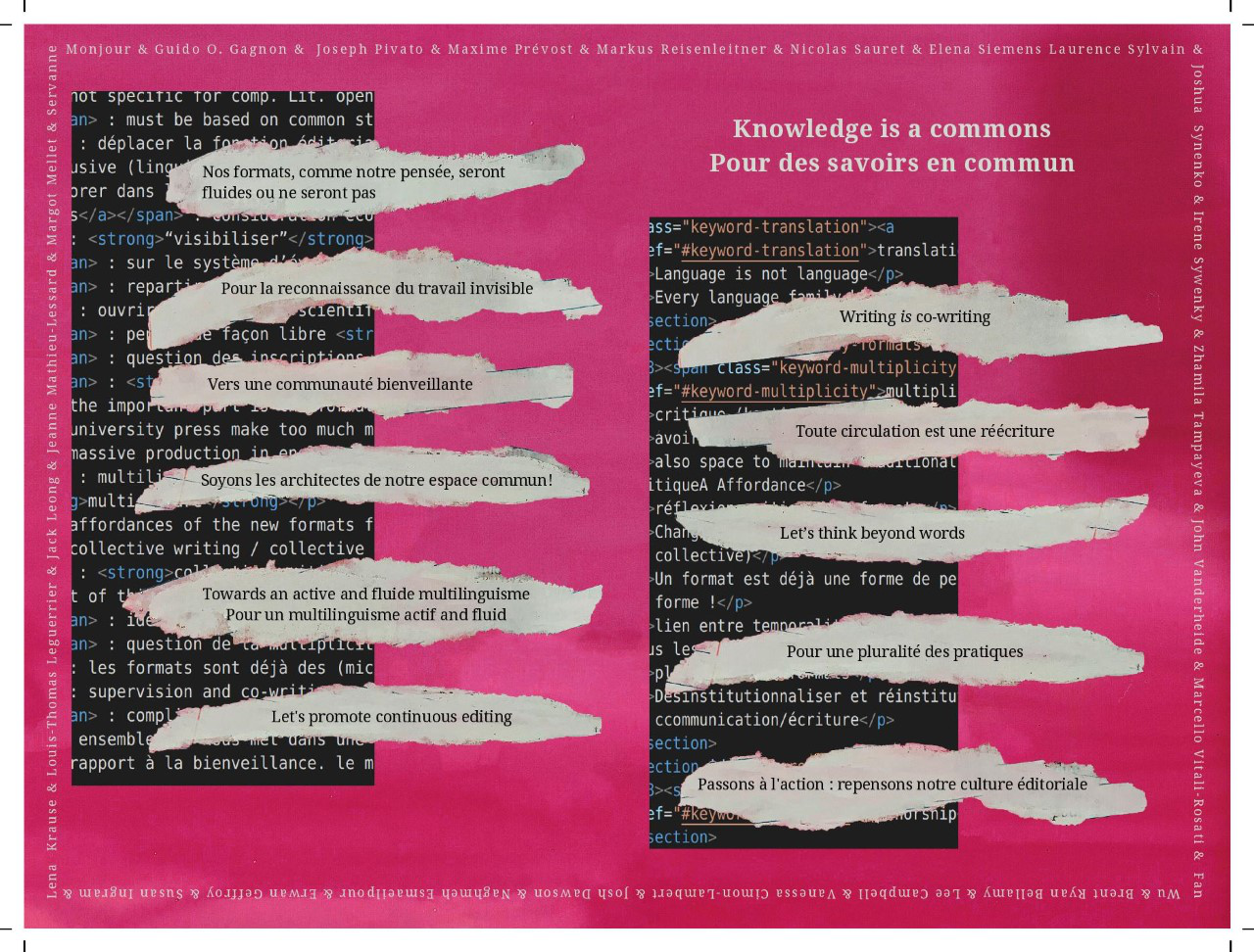 The Canadian Comparative Literature Association (CCLA/ACLC) celebrated in 2019 its fiftieth anniversary. The association’s annual conference, which took place from June 2 to 5, 2019 as part of the Congress of the Humanities and Social Sciences of Canada at UBC (Vancouver), provided an opportunity to reflect on the place of comparative literature in our institutions. We organized a joint bilingual roundtable bringing together comparatists and digital humanists who think and put in place collaborative editorial practices. Our goal was to foster connections between two communities that ask similar questions about the modalities for the creation, dissemination and legitimation of our research. We wanted our discussions to result in a concrete intervention, thought and written collaboratively and demonstrating what comparative literature promotes. The manifesto you will read, “Knowledge is a commons – Pour des savoirs en commun”, presents the outcome of our collective reflexion and hopes to be the point of departure for more collaborative work.

Thanks to a panel on the Journal in the digital age at CSDH-SCHN 2020 I learned about the manifesto, Knowledge is a commons – Pour des savoirs en commun. The manifesto was “written colingually, that is, alternating between English and French without translating each element into both languages. This choice, which might appear surprising, puts into practice one of our core ideas: the promotion of active and fluid multilingualism.” This is important.

The manifesto makes a number of important points which I summarize in my words:

We’re sharing the progress we’ve made in building a new organization with independent oversight over how Facebook makes decisions on content.

I can’t help feeling that Facebook is still trying to avoid being a content company. Instead of admitting that parts of what they do matches what media content companies do, they want to stick to a naive, but convenient, view that Facebook is a technological facilitator and content comes from somewhere else. This, like the view that bias in AI is always in the data and not in the algorithms, allows the company to continue with the pretence that they are about clean technology and algorithms. All the old human forms of judgement will be handled by an independent GOB so Facebook doesn’t have to admit they might have a position on something.

What Facebook should do is admit that they are a media company and that they make decisions that influence what users see (or not.) They should do what newspapers do – embrace the editorial function as part of what it means to deal in content. There is still, in newspapers, an affectation to the separation between opinionated editorial and objective reporting functions, but it is one that is open for discussion. What Facebook is doing is a not-taking-responsibility, but sequestering of responsibility. This will allow Facebook to play innocent as wave after wave of fake news stories sweep through their system.

Still, it is an interesting response by a company that obviously wants to deal in news for the economic value, but doesn’t want to corrupted by it.

Pharos is an effort among 14 institutions to create a database that will eventually hold and make accessible 22 million images of artworks.

The New York Times has a story about a collaboration to develop the Pharos consortium photo archive, ‘Photo Archives Are Sleeping Beauties.’ Pharos Is Their Prince. The consortium has a number of interesting initiatives they are implementing in Pharos:

The CIDOC Conceptual Reference Model (CRM) provides definitions and a formal structure for describing the implicit and explicit concepts and relationships used in cultural heritage documentation.

END_OF_DOCUMENT_TOKEN_TO_BE_REPLACED 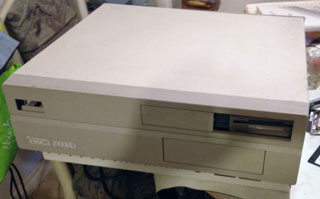 From Slashdot I came across a site on the Amiga called the The Amiga Lounge. On the site they have a story on The Almost forgotten Story of the Amiga 2000. The 2000 isn’t a favorite for collection, but it was the machine that took the Video Toaster card which made video editing and effects possible on the Amiga before other personal computers.

From Twitter I learned about the Museum of Online Museums. The idea is great. It is part of a site by Coudal Partners, “a design, advertising and interactive studio … as an ongoing experiment in web publishing, design and commerce.” I’m not sure what that means? Will this survive? They also have an enormous Board which seems to be voluntary.

On the MoOM I found some neat online museums like the Sheaff : ephemera.

The New York Times and the National Film Board (of Canada) have collaborated on a great interactive A Short History of the Highrise. The interactive plays as a documentary that you can stop at any point to explore details. The director, Katerina Cizek, on the About page talks about their inspiration:

I was inspired by the ways storybooks have been reinvented for digital tablets like the iPad. We used rhymes to zip through history, and animation and interactivity to playfully revisit a stunning photographic collection and reinterpret great feats of engineering.

For the NFB this is part of their larger Highrise many-media project.