The 2007 Video Game Report Card from MediaWise.org is out. It focuses primarily on ESRB ratings, whether parents understand them and how they are being used by retailers. The summary reports that,

this year, our findings suggest that the unacceptable negative impact of excessively violent video games on young people is a problem depicted in an ever expanding body of research. Increasingly, the companies which create and market the games, the retailers who sell them and the parents who buy them have become too comfortable with the voluntary standards they set for themselves in previous years.

Complacency, especially on the part of retailers and parents, appears to have caused a backslide in ratings awareness and enforcement.

The full report (which can be downloaded) has a fairly succinct review on the research about links between gaming and violence along with a bibliography. The report obviously takes the stand that children should not be playing ESRB M or AO rated games and that retailers and places that rent games need to train clerks better to enforce rules about who can buy games. There is some interesting stuff about blurred sequences in M (Mature) games. They go further and suggest that we need a common rating for all entertainment media:

A universal ratings system is needed now, more than ever, to increase ratings knowledge and reduce confusion. A majority of parents favor one rating system for all media.

In Search of Stupidity, over 20 years of high-tech marketing disaster is an amusing book about the marketing and development of commercial software by Merrill R. Chapman. Some of the chapters deal with poor decisions by word-processing companies like MicroPro that ended up with two competing products (WordStar 3.3 and Wordstar 2000) and completely different programs. MicroPro International, according to Chapman was in 1983 the largest microcomputer software company with close to 70 million in sales. The problem was they the WordStart programming team was fired (or quit) and a new team bought up had a different word-processor in development.

One thing this book documents well is the battles between the management/marketing folk, on the one hand, and the developers, on the other. The fault does not always lie with the marketing folk. Chapman describes situations where the developers decide to totally redevelop a product from the ground up when the market is expecting a timely upgrade. Philippe Kahn of Borland, for example, decided to redevelop Paradox completely in object-oriented code and ended up alienating his users just when Microsoft released Access.

The one company that stands out as consistently avoiding fatal stupid mistakes is Microsoft which may explain why they are now so much bigger than any other software company. That Microsoft had an experienced programmer as lead probably meant there was never the sort of disconnect that doomed other software companies.

The book is partly a response to In Search of Excellence which lauded a number of high-tech companies as having excellent coporate cultures. Unfortunately many of the “excellent” companies didn’t last … hence the search for stupidity.

Check out their Museum Exhibits of stupid marketing.

On Friday I heard Barry Allen talk about tools. His talk touched on points he makes in his forthcoming book, Artifice and Design: Art and Technology in Human Experience. He defined a tool as having two distinctive qualities:

After the talk Barry and I talked about software as tools. He would say that a book or a movie is an artifact, but not a tool. At what point does a digital artifact go from being data to being a tool? When it is executable? Is a web page information or a tool?

So, thanks to Shawn, I’ve figured out how to blog from my new toy, a Blackberry Curve 8310.

The Blackberry is optimized for e-mail, which it does very well. I’m surprised how well the mini-keyboard works, so I’m hoping this will let me get through e-mail in the bits of time between things and leave more uninterrupted time for tasks that take thought. The Curve 8310 also has GPS and maps so you can find yourself and get directions. I’m looking forward to some more interesting geolocation services. The problem is that the GPS can’t find satellites inside buildings unless you go to a window and the system doesn’t seem to use the cell towers for location.

What is amazing is how much they can fit into a smartphone these days. A device like the Curve, which is smaller than a deck of cards, has functionality beyond a laptop. The real problem is interface – input and output – not technology.

Now to see how this changes my habits.

Values At Play is a web site and research project to encourage the design of social values in computer games. The site has curricular materials, example games that registered users can download and research resources. It is led by Dr. Mary Flanagan of the Tiltfactor game research lab at Hunter College, and Dr. Helen Nissenbaum at NYU.

Our ambition is to harness the power of video games in the service of humanistic principles, or human values, knowing that their work can have a tremendous and wide-ranging impact on our world. The Values at Play (VAP) research project assists and encourages designers to create computer games that identify and promote human values. 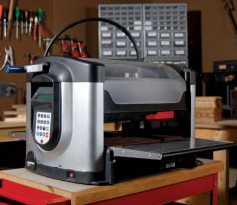 Digital woodcarvers, CNC for the home shop is here! CarveWright is a computer controlled router that can handle wood up to 15 inches wide, 5 inches high and many feet long. It comes with software that uses a “clipart” paradigm so you can combine ornate patterns and then “print” them to wood (or plastic or other soft materials.)

Sears Craftsman has issued the carver as CompuCarve and you can see their ad on YouTube.

I’m tempted to say that this could be a revolutionary product for home woodworkers. Woodworking has always had an element of danger (spinning saws) and an element of manual skill. With tools like the CarveWright it could become a form of output where the skill is in the use of the software not the struggle with the medium. Wood will become plastic – something to be molded as if it had no grain to cut along. For that matter, the CarveWright can be thought of as the first affodable 3-D printer (though it is being marketed to woodworkers first.) Just as CNC has had a dramatic effect on design and manufacturing, now affordable devices bring engineering into the home. What could you do with an all-material 3-D printer? Would you be buying plans for a stove instead of the stove itself?

I have fantasized about replacing all the dangerous tools in my shop with one CNC router big enough to do any shaping from undressed wood. Now that a scaled down version exists, I’m scared the craft of woodworking will fade away like typesetting. Why have a dangerous table-saw when the CarveWright will rip wood, and will do so safely (though slowly)? Am I afraid that anyone will be able to do projects I struggled over? Will it be like the 80s with desktop publishing and all the ugly newsletters and typesetters helplessly complaining? (Looking at the examples on the CarveWright site certainly suggests that bad taste dominates initially.) Or will it turn out just to be another shop tool that gathers the dust of good intentions? 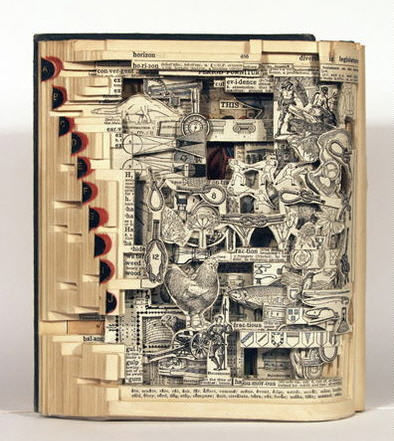 Shawn sent me this link for the The Most Unusual Books of the World. Loyal readers will have seen my Text in the Machine experiment on Flickr (where there is a photoessay).

McMaster’s archives actually have a number of English fore-edge painted books that were, apparently, popular gifts in their time.

I’m trying to imagine a visualization tool that would show you selected passages cut sculpturally out of a 3D book.

Hussein Chalayan is a designer who is creating crystal and laser dresses that are extraordinary to watch. The Swarovski site has short videos of Hussein explaining how they make the outfits and then video of them shown. It is another take on smart fabrics.

Thanks to Jennifer for this.

The e-book that seemed to be dead as an idea is back. Sony has their Reader which uses e-ink to offer a more paper-like reading experience.

Amazon has just announced the Kindle which has a keyboard and can EV-DO free wirless access so you can order material from Amazon without connecting to your PC. The Amazon video mentions that you can automatically get newspapers and updates from blogs.

I’m guessing one of the real strengths of Kindle is Amazon – that they will have the best content and with EV-DO they will have easy access to content wherever you can get a connection. On the other hand the Kindle looks dorky (not that the Sony looks much better.) As they say, WWAD (what would Apple do?)

To be honest I thought the e-book reader as a device was dead after the last round of devices like the Rocket eBook.Â  I figured tablet PCs and PDAs would make dedicated readers obsolete – we do after all read lots of pages off screens already. See Cory Doctorow on Ebooks: Neither E, Nor Books. But, I was wrong … it seems the big guys think there is a market for such appliances.

Live Projections is an exhibit by my colleague Liss Plat and others.