The Journal of Digital Humanities has republished my Short Guide to Evaluation of Digital Work as part of an issue on Closing the Evaluation Gap (Vol. 1, No. 4). I first wrote the piece for my wiki and you can find the old version here. It is far more useful bundled with the other articles in this issue od JDH.

The JDH is a welcome experiment in peer-reviewed republication. One thing they do is to select content that has been published in other forms (blogs, online essays and so on) and then edit it for recombination in a thematic issue. The JDH builds on the neat Digital Humanities Now that showcases neat stuff on the web. Both are projects of the Roy Rosenzweig Center for History and New Media. The CHNM deserved credit for thinking through what we can do with the openness of the web.

The other day while browsing around looking for books to read on my iPad I noticed what looked like a dissertation for sale. I’ve been wondering how dissertations could get into e-book stores when I remembered the license that graduate students are being asked to sign these days by Theses Canada. The system here encourages students to give a license to Library and Archives Canada that includes the right,

(a) to reproduce, publish, archive, preserve, conserve, communicate to the public by telecommunication or on the Internet, loan, distribute and sell my thesis (the title of which is set forth above) worldwide, for commercial or non-commercial purposes, in microform, paper, electronic and/or any other formats;

I now just came across this cautionary story in the Chronicle for Higher Education about Dissertation for Sale: A Cautionary Tale. It seems it is also allowed in the US.

From Slashdot a story about how the Faculty Advisory Council to the Library (of Harvard) sent around a Memorandum on Journal Pricing arguing that periodical subscriptions are not sustainable and that faculty should therefore publishing in open-access journals.

The Faculty Advisory Council to the Library, representing university faculty in all schools and in consultation with the Harvard Library leadership, reached this conclusion: major periodical subscriptions, especially to electronic journals published by historically key providers, cannot be sustained: continuing these subscriptions on their current footing is financially untenable. Doing so would seriously erode collection efforts in many other areas, already compromised.

My paper “On the Evaluation of Digital Media as Scholarship” has just been published online in MLA: Profession 2011 (pp. 152-168). The PDF is freely available. The abstract reads,

As more and more scholarship is digital, we need to develop a culture of conversation around the evaluation of digital academic work. We have to be able to evaluate new types of research, like analytic tools and hypermedia fiction, that are difficult to review. The essay surveys common types of digital scholarly work, discusses what evaluators should ask, discusses how digital researchers can document their scholarship, and then discusses the types of conversations hires and evaluators (like chairs) should have and when they should have them. Where there is a conversation around evaluation in a department, both hires and evaluators are more likely to come to consensus as to what is appropriate digital research and how it should be documented.

This is part of a collection put together by Susan Schreibman, Laura Mandell and Stephen Olsen about Evaluating Digital Scholarship. McGann and Bethany Nowviskie, among others, also have papers in this issue of Profession.

Thanks to Sharla I came across Issuu a site for publishing online magazine like documents. You get an account, you upload documents, and they create an interactive page-flipping e-publication out of it. When you “Click to read” a publication an application takes over your screen to give you a reading environment. They seem to have a lot of publications made available this way. 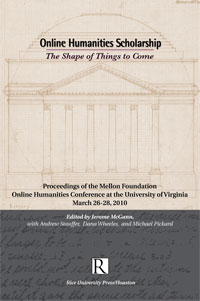 Jerome McGann and Rice have published the Proceedings of The Shape of Things to Come — Rice University Press in record time. The conference took place in March and the essays are now up on line and coming out in print. (See my blog entry and conference report on the original conference.)

“Certain questions,” Jerome McGann writes in his introduction, “are especially insistent: How do we sustain the life of these digitally-organized projects; how do we effectively address their institutional obstacles and financial demands; how do we involve the greater community of students and scholars in online research and publication; how do we integrate these resources with our inherited material and paper-based depositories; how do we promote institutional collaborations to support innovative scholarship; how do we integrate online resources, which are now largely dispersed and isolated, into a connected network?”

The Google Book Search Settlement, if approved by Judge Chin, may be a turning point in textual research. In principle, if the settlement goes through, then Google will release the full 7-10 million books for research (“non-consumptive”) use. Should get even the 500,000 public domain books for research we will have a historic corpus far larger than anything else. To quote the Greg Crane D-Lib article, “What can you do with a million books?” and “What effect will millions of books have on the textual disciplines?”

There is understandably a lot of concerns about the settlement especially about the ownership of orphan works. The American Library Association has a web site on the settlement, as do others. I think we need to also start talking about how to develop a research infrastructure to allow the millions of books to be used effectively. What would it look like? What could we do? Some ideas:

Update: Matt pointed me to an article in the Wall Street Journal on Tech’s Bigs Put Google’s Books Deal In Crosshairs.

Thanks to Peter O I came across Clay Shirky’s excellent analysis of what’s going on with newspapers and the web, Newspapers and Thinking the Unthinkable . Some of the salient points:

Revolutions create a curious inversion of perception. In ordinary times, people who do no more than describe the world around them are seen as pragmatists, while those who imagine fabulous alternative futures are viewed as radicals. The last couple of decades havenâ€™t been ordinary, however. Inside the papers, the pragmatists were the ones simply looking out the window and noticing that the real world was increasingly resembling the unthinkable scenario. These people were treated as if they were barking mad. Meanwhile the people spinning visions of popular walled gardens and enthusiastic micropayment adoption, visions unsupported by reality, were regarded not as charlatans but saviors.

When reality is labeled unthinkable, it creates a kind of sickness in an industry.

With the old economics destroyed, organizational forms perfected for industrial production have to be replaced with structures optimized for digital data. It makes increasingly less sense even to talk about a publishing industry, because the core problem publishing solves â€” the incredible difficulty, complexity, and expense of making something available to the public â€” has stopped being a problem.

What Eisenstein focused on, though, was how many historians ignored the transition from one era to the other. To describe the world before or after the spread of print was childâ€™s play; those dates were safely distanced from upheaval. But what was happening in 1500? The hard question Eisensteinâ€™s book asks is â€œHow did we get from the world before the printing press to the world after it? What was the revolution itself like?â€

The competition-deflecting effects of printing cost got destroyed by the internet, where everyone pays for the infrastructure, and then everyone gets to use it. And when Wal-Mart, and the local Maytag dealer, and the law firm hiring a secretary, and that kid down the block selling his bike, were all able to use that infrastructure to get out of their old relationship with the publisher, they did. Theyâ€™d never really signed up to fund the Baghdad bureau anyway.

â€œYouâ€™re gonna miss us when weâ€™re gone!â€ has never been much of a business model. So who covers all that news if some significant fraction of the currently employed newspaper people lose their jobs?

I donâ€™t know. Nobody knows. Weâ€™re collectively living through 1500, when itâ€™s easier to see whatâ€™s broken than what will replace it.

Actually I think there are ideas floating around as to what might fill the gap:

To conclude with another quote from the Shirky essay, “Society doesn’t need newspapers. What we need is journalism.”

From Twitter I found a link to Peter Suber, Open Access News where there is a story of MIT’s unanimous faculty vote to adopt an Open Access mandate that gives the University the right to archive and make available their articles. Like the Harvard mandate, faculty can opt out if they have a good reason.

Each Faculty member grants to the Massachusetts Institute of Technology nonexclusive permission to make available his or her scholarly articles and to exercise the copyright in those articles for the purpose of open dissemination.

A couple of weeks ago I posted a blog entry about Gary Hall’s book Digitize This Book! I noted that I couldn’t find a digitized copy of the book and asked if others knew of one. To my surprise Gary wrote me back and pointed to the items listed below. Now that is the Internet at work! He is trying to get the publisher to allow a digital copy to be posted online, but in the meantime pointed out online versions of what became chapters in the book:

Gary Hall says that “Since the book came out I’ve also published a new piece on open access publishing and the humanities” at http://www.culturemachine.net/index.php/cm/issue/current. A video of him presenting it as a talk is available at Pirate Philosophy – Steal This! .

I take back any irony in my previous post. (Can one take back irony? Perhaps I can only apologize for being ironic to early.)