The folks at #dariah Teach have put together a first of a series of videos on My Digital Humanities. Despite appearing in it, the video seems very nicely produced and there is a nice mix of people. Stéfan Sinclair and I were interviewed together, something that isn’t clear in the first part, but will presumably become clear later.

The New York Times has a video series called the Retro Report. One story is about Dungeons & Dragons: Satanic Panic. It looks at the media fed moral panic that eventually lost steam. It ends by praising all the “leadership” and “moral” skills learned. Now experts are recommending “free play” and … ironically … role playing games are now the solution!

The folks at the University of Western Sydney have now put up the keynote talks from DH 2015. See Digital Humanties Conference 2015 – YouTube.

I particularly recommend the two Keynotes by Jeffrey Schnapp and Genevieve Bell. You can see my conference notes here.

I was part of the panel on Building Communities and Networks in the Humanities.

CBC and others are reporting on a new Nintendo Creators Program where Nintendo will take a percentage of the ad revenue associated with a YouTube channel or video with playthroughs (Let’s Play) of their games. See YouTube gaming stars blindsided by Nintendo’s ad revenue grab or Nintendo’s New Deal with Youtubers Is A Jungle Of Rights. This will

The Nintendo Creators Program presents this in their Guide as an opportunity to make money off their copyrighted materials,

In the past, advertising proceeds that could be received for videos that included Nintendo-copyrighted content (such as gameplay videos) went to Nintendo, according to YouTube rules. Now, through this service, Nintendo will send you a share of these advertising proceeds for any YouTube videos or channels containing Nintendo-copyrighted content that you register.

This program is only for “copyrighted content related to game titles specified by Nintendo”. This is probably because Nintendo has to be careful to not be seen as making money off playthroughs of other publisher’s games.

Michael pointed me to a story about how Stanford scientists put free text-analysis tool on the web. The tool allows you to pass a text (or a Twitter hashtag) to an existing classifier like the Twitter Sentiment classifier. It then gives you a interactive graph like the one above (which shows tweets about #INKEWhistler14 over time.) You can upload your own datasets to analyze and also create your own classifiers. The system saves classifiers for others to try.

I’m impressed at how this tool lets people understand classification and sentiment analysis easily through Twitter classifications. The graph, however, takes a bit of reading – in fact, I’m not sure I understand it. When there are no tweets the bars go stable, and then when there is activity the negative bar seems to go both up and down.

On December 1st, 2011 Wikileaks began releasing The Spy files, a collection of documents from the intelligence contractors. These documents include presentations, brochures, catalogs, manuals and so on. There are hundreds of companies selling tools to anyone (country/telecom) who wants to spy on email, messaging and phones. I find fascinating what they should about the types of tools available to monitor communications, especially the interfaces they have designed for operatives. Here are some slides from a presentation by Glimmerglass Networks (click to download entire PDF).

END_OF_DOCUMENT_TOKEN_TO_BE_REPLACED

The New York Times and the National Film Board (of Canada) have collaborated on a great interactive A Short History of the Highrise. The interactive plays as a documentary that you can stop at any point to explore details. The director, Katerina Cizek, on the About page talks about their inspiration:

I was inspired by the ways storybooks have been reinvented for digital tablets like the iPad. We used rhymes to zip through history, and animation and interactivity to playfully revisit a stunning photographic collection and reinterpret great feats of engineering.

For the NFB this is part of their larger Highrise many-media project.

The University of Alberta has put together a set of short (60 second) lectures by faculty on what they do. See Arts in 60 seconds and ignore my one. 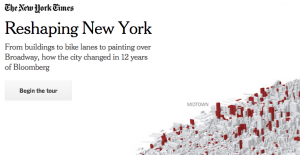 The New York Times has a fabulous new interactive visualization called Reshaping New York that shows how Bloomberg has changed the city of 12 years. It shows new buildings, the rezoning, the introduction of bike lanes, and the celebration of the waterfront. The visualization is more of a tour that combines a 3D model of the city with images of before and after Bloomberg.