Yesterday (Friday the 13th of August) we finished the 5th day of the Replaying Japan 2021 conference. The conference was organized by the AI for Society Signature Area, the Kule Institute for Advanced Study, and the Prince Takamado Japan Centre all at the University of Alberta.

At the conference I organized a roundtable about the Replaying Japan conference itself titled “Ten Years of Dialogue: Reflecting on Replaying Japan.” I moderated the discussion and started with a brief history that I quote from here:

The Replaying Japan conference will have been going now for ten years if you include its predecessor symposium that was held in 2012 in Edmonton, Canada.

The encounter around Japanese Game Culture came out of the willingness of Ritsumeikan University to host Geoffrey Rockwell as a Japan Foundation Japan Studies Fellow in Kyoto in 2011. While Rockwell worked closely with researchers like Prof. INABA at the Ritsumeikan Digital Humanities Centre for Japanese Arts and Culture, he also got to meet Professors Nakamura and Koichi at the Ritsumeikan Centre for Game Studies. Out of these conversations it became clear that game studies in the West and game studies in Japan were not in conversation. The research communities were siloes working in their own languages that didn’t intermingle much. We agreed that we needed to try to bridge the communities and organized a first small symposium in 2012 in Edmonton with support from the Prince Takamado Japan Centre at the University of Alberta. At a meeting right after the symposium we developed the idea for a conference that could go back and forth between Japan and the West called Replaying Japan. Initially the conference just went back and forth between Kyoto and Edmonton, but we soon started going to Europe and the USA which expanded the network.

(From the abstract for the roundtable)

At the conference I was also part two papers that were presented others:

You can see the conference Schedule here.

The visual programming language has a number of functions for handling images and using artificial intelligence techniques on them. It also has text functions, but they are apparently not fully worked out.

I love the way Impett combines off the shelf systems while adding a nice visual development environment. Very clean. 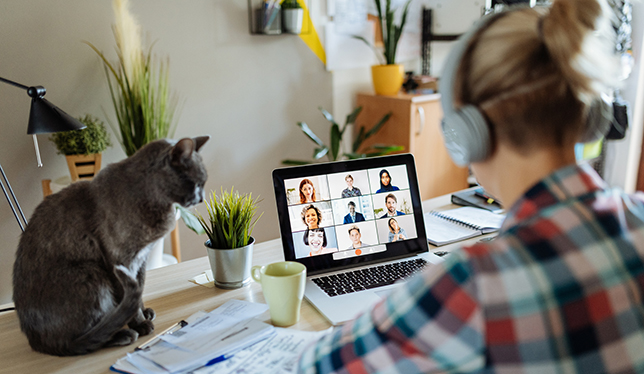 How the traditional conference format has been reimagined in the wake of COVID-19 lockdowns.

University Affairs recently published a short article we wrote on Embracing econferences: a step toward limiting the negative effects of conference culture. The article came out of our work on a collection titled Right Research: Modelling Sustainable Research Practices in the Anthropocene.

The article talks about the carbon cost of flying and the advantages of econferencing, that we have all learned about in this pandemic. It asks about after the pandemic.

As we move into the post-pandemic future, we find ourselves at a crossroads. Once travel restrictions are lifted, will we return to face-to-face conferences and double-down on travel requirements? Or will we continue to explore more sustainable, virtual alternatives, like econferences? 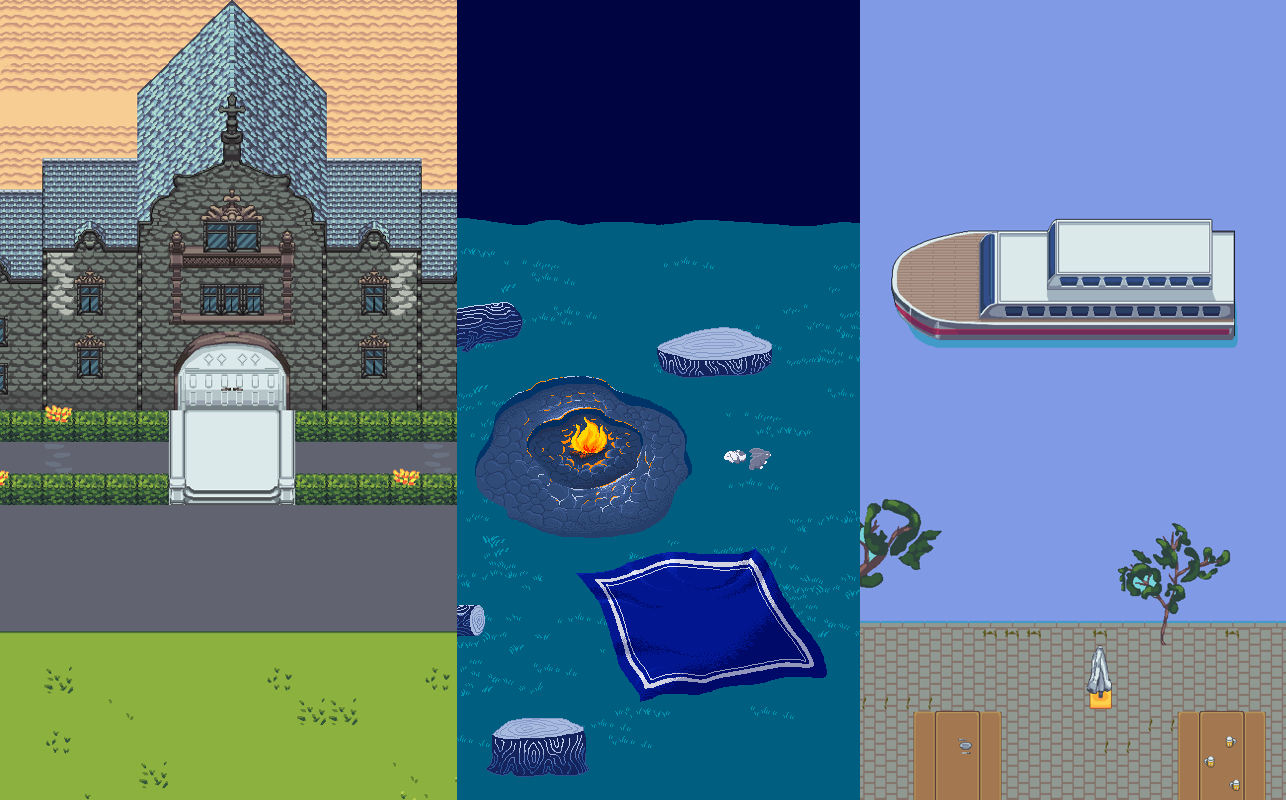 Gather is a video-calling space that lets multiple people hold separate conversations in parallel, walking in and out of those conversations just as easily as they would in real life.

Kisha introduced me to Gather, a cross between Second Life and Zoom. If you have a Gather account you can create a space – your own little classroom with different gathering spots. People then move around these 8-bit animated spaces and when they are in hearing distance they can video conference. Users can also read posters put up, or documents left around, or watch videos created for a space. It actually looks like a nice type of space for a class to use as an alternative to Zoom. 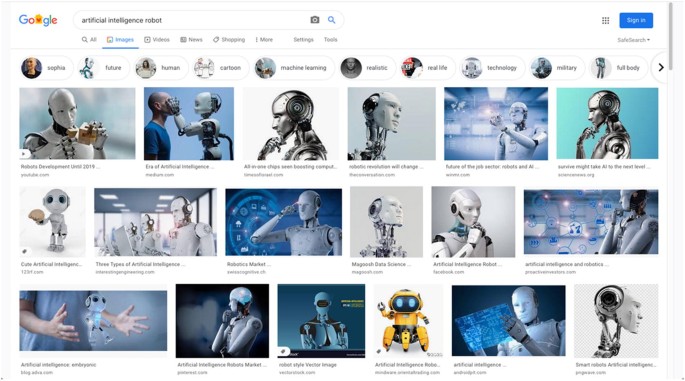 This paper focuses on the fact that AI is predominantly portrayed as white—in colour, ethnicity, or both. We first illustrate the prevalent Whiteness

“The Whiteness of AI” was mentioned in an online panel following The State of AI Ethics report (October 2020) from the Montreal AI Ethics Institute. This article starts from the observation that if you search Google images for “robot” or “AI” you get predominately images of white (or blue) entities. (Go ahead and try it.) From there it moves to the tendency of “White people; and the persistent tendency of members of that group, who dominate the academy in the US and Europe, to refuse to see themselves as racialised or race as a matter of concern at all.” (p. 686)

The paper then proposes three theories about the whiteness of AI to make it strange and to challenge the myth of colour-blindness that many of us in technology related fields live in. Important reading!

Prof. Jason Edward Lewis led the Indigenous Protocol and Artificial Intelligence Working Group in providing a starting place for those who want to design and create AI from an ethical position that centres Indigenous perspectives. Dr. Maggie Spivey- Faulkner provided a response.

Lewis talked about the importance of creative explorations from indigenous people experimenting with AI.

The Folio has published a short story on the talk, Creating ethical AI from Indigenous perspectives. The video should be up soon.

International Day for Universal Access to Information focused on the right to information in times of crisis and on the advantages of having constitutional, statutory and/or policy guarantees for public access to information to save lives, build trust and help the formulation of sustainable policies through and beyond the COVID-19 crisis. Speakers talked about how vital access to accurate information is in these pandemic times and the role artificial intelligence could play as we prepare for future crises. Tied to this was a discussion of the important role for international policy initiatives and shared regulation in ensuring that smaller countries, especially in the Global South, benefit from developments in AI. The worry is that some countries won’t have the digital literacy or cadre of experts to critically guide the introduction of AI.

Replaying Japan is an international conference dedicated to the study of Japanese video games. For the first time this year, the conference is held online and will combine various types of research contents (videos, texts, livestreams) on the theme of esport and competitive gaming in Japan.

This year the Replaying Japan conference was held online. The conference was originally going to be in Liège, Belgium at the Liège Game Lab. We were going to get to try Belgian fries and beer and learn more about the Game Lab. Alas, with the pandemic, the organizers had to pivot and organize an online conference. They did a great job using technologies like Twitch and Minecraft.

Keiji Amano, Tsugumi (Mimi) Okabe, and I had a paper on Ethics and Gaming: A Content Analysis of Annual Reports of the Japanese Game Industry presented by Prof. Amano. (To read the longer conferencer paper you need to have access to the conference materials, but they will be opening that up.) We looked at how major Japanese game companies frame ethical or CSR (corporate social responsibility) issues which is not how ethics is being discussed in the academy.

The two keynotes were both excellent in different ways. Florent Georges talked about First Steps of Japanese ESports. His talk introduced a number of important early video game competitions.

Susana Tosca gave the closing keynote. She presented a nuanced and fascinating talk on Mediating the Promised Gameland (see video). She looked at how game tourists visit Japan and interviewed people about this phenomenon of content tourism. This was wrapped in reflections on methodology and tourism. Very interesting, though it raised some ethical issues about how we watch tourists. She was sensitive to the way that ethnographers are tourists of a sort and we need to be careful not to mock our subjects as we watch them. As someone who loves to travel and is therefore often a tourist, I’m probably sensitive on this issue.

The Replaying Japan Journal has issued a call for papers for Issue 3 with a deadline of September 30th, 2020. See the Current Call for Papers – Replaying Japan. The RJJ publishes original research papers on Japanese videogames, game culture and related media. We also publish translations, research notes, and reviews.

The RJJ is available online and in print, published by the Ritsumeikan (University) Center for Game Studies (See the RCGS English Pamphlet too). Inaba, Mitsuyuki is the Editor in Chief and Fukuda, Kazafumi is the Associate Editor. I and Jérémie Pelletier-Gagnon are the English Editors.

Articles in either Japanese or English are accepted. The Japanese Call for Papers is here.

Today was the last day of the CSDH / SCHN 2020 online conference. You can see my conference notes here. The conference had to go online due to Covid-19 and the cancellation of Congress 2020. That said, the online conference web brilliantly. The Programme Committee, chaired by Kim Martin, deserve a lot of credit as do the folks at the U of Alberta Arts Resource Centre who provided technical support. Some of the things they did that

The nice thing about the conference was that they took advantage of the medium. As none of us had flown to London, Ontario, they were able to stretch the conference over 5 days, but not use up the entire day.

All told, I think they have shown that an online conference can work surprisingly well if properly planned and supported.