The CNW Group that has it’s Canadian base in Toronto has a new service called MEDIAVANTAGE that has many of the features of a multimedia news crawling, managing, and visualizing service. From the Flash intro it looks like users define keywords to track. Mediavantage then shows you results from different sources. It can send alerts and graphs result history. 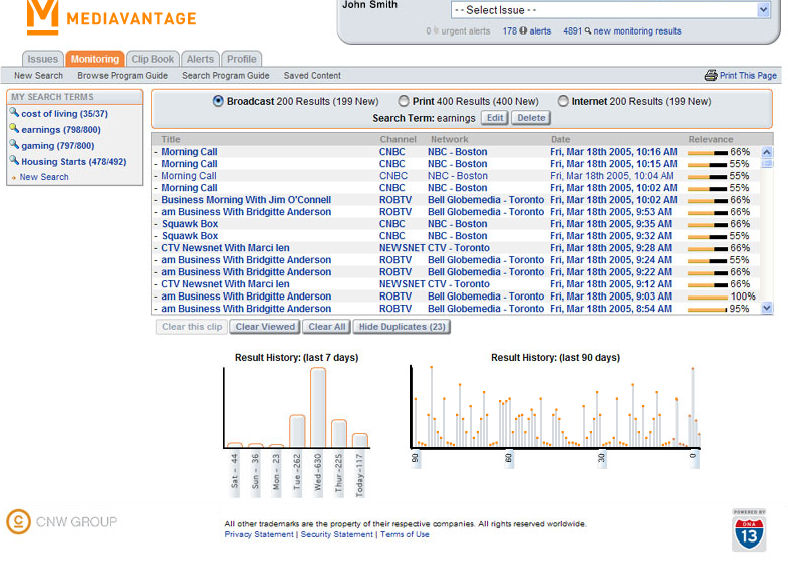 The interesting part is that they track TV news and provide text summaries that look like the text off close captioning. Subsets of results can be shared by e-mail and PDF. This is a news mining tool for business that offers a model for what Web Mining for Research might look like.

Mike Elgan has an article on iPhone: 20 things we don’t know (Jan. 12, 2007) in Digit a magazine about “the future of digital design”. In particular I agree with his questions about the touch screen interface and virtual keyboard – will it be responsive enough for Blackberry users who do push e-mail?

One way of asking about the iPhone is to think about the Newton PDA which was also supposed to be a magical reinvention of personal computing. Like the iPhone, and unlike the iPod, it tried to do lots of things and as a result didn’t do anything well. The Palm Pilot got the PDA market right by doing fewer things very well and in a small enough package to fit in your pocket. As pretty and desirable as the iPhone is, I worry that it will be a delicate and fat phone; a slow and poor Internet device; and an expensive iPod with little memory.

That said, it will shakeup the cell phone business. If it doesn’t take off, someone else will get the need for new designs and digital integration right.

Update: Shawn pointed me to an article Apple Ushers in Era of the Fluid UI by Om Malik. Malik correctly, I think, identifies the fluid interface as the important innovation.

I went to the first Hamilton performance of the Shakespeare and the Queen’s Men project. SQM is a SSHRC funded Research/Creation project that is reconstructing how plays would have been put on in the late 16th century during Shakespeare’s apprenticeship. I will be involved in the internet research site where we hope to put up streaming video footage from the project that documents the reconstruction research. The play I saw, King Leir, directed by Peter Cockett, was terrific. The procession of dignitaries included McMaster’s president and AVP (Academic) Fred Hall. They sat at the back of the stage where us less important types could see if they fell asleep during the performance. King Leir repeatedly addressed them when talking about the evils of flattery (the main theme of this version.)

A review in the National Post discusses the Toronto performance of the King Leir which I saw.

A more stimulating sidelight on Shakespeare in general and King Lear in particular can be had from Shakespeare and the Queen’s Men, a joint theatrical-academic project on view at the Glen Morris Theatre, on the University of Toronto campus, and subsequently beyond. The Queen’s Men were an Elizabethan theatre company who flourished briefly in the 1580s, in London and on tour, before disappearing from the record in mysterious, and conceivably sinister, circumstances. This was just before Shakespeare began his career, and the present enterprise is staging and discussing three plays that definitely or conceivably influenced him.

Another horrible shooting at a school and once again there is a reported connection to a mix of blogs, goth culture and videogames. The Globe and Mail has a story about how the Blog of accused killer reveals dark character (Scott Deveau). The blog, which is still (as of posting) accessible, now has 233 comments on the last entry posted an hour before Kimveer went.

As for the videogame connection, Montreal gunman called himself ‘angel of death’ is the title of a CBC story that quotes the blog,

“Work sucks ‚Ä¶ School sucks ‚Ä¶ Life sucks ‚Ä¶ What else can I say?” he wrote. “Metal and Goth kick ass. Life is like a video game, you gotta die sometime.”

The Globe and Mail article quotes more from the blog on the subject of videogames,

Among other things, he says his likes were: ‚ÄúFirst Person Shooters‚Äù and ‚ÄúSuper Psycho Maniacs roaming the streets.‚Äù He also says he likes his knife, guns, and ‚ÄúCrushing My Enemies Skulls.‚Äù

Among his favourite video games are several first-person shooting games, including Super Columbine Massacre RPG, which has players mimic the infamous high school killings in Columbine, Colo., the morning of April 20, 1999, through the eyes of the teenage killers. The shootings at Dawson College on Wednesday are a chilling echo of those events.

Mr. Gill also lists Postal as another of his favourite games. The purpose of that game is to get through as much of the game as possible without going berserk and gunning people down, or, failing that, to avoid getting caught and being thrown in jail.

‚Äúi want them to make a game so realistic, that it looks and feels like it’s actually happening,‚Äù he wrote in his blog.

Setting aside the question of who would create a game like “Super Columbine Massacre RPG”, I find it hard to believe that videogames didn’t let Kimveer model his violent fantasies.

Now I’m going to go back to the 233 comments on that last post. A snapshot of reactions from anger to concerns about how goth culture will be portrayed.

CyberOne: Law in the Court of Public Opinion is a law class about argument outside of court and on the net. The class is by Harvard prof Charles Nesson and his daughter Rebecca Nesson. There is a trailer video that explains the class and how you can join through Second Life. There is an interesting moment when you shift from the video of Nesson to video of his avatar in a recreation of the same space.

Note how video is the way virtual encounters are being documented.

Thanks to Johnny for the Infinite Minds link and Peter for the Harvard link.

The BBC have a story on Texting study to catch criminals by researchers at Leicester University in the School of Psychology. They are studying the individual styles of text messages in order to help with forensic investigations. The BBC had previously reported how Text messages examined in Danielle case had helped in the prosecution of the 15-year-old Danielle Jones’ uncle who seems to have sent text messages from Danielle’s phone in order to throw off the scent.

The Leicester University researchers have a web page that welcomes people willing to submit samples. I wonder how useful anonymously submitted messages will be. I imagine, if they get enough messages, it will give them a control sample for the study of particular suspect messages.

Instant messaging is not a spoiler of syntax in youth, U of T study suggests (Victoria Ahearn, Canadian Press, August 1, 2006) is a news story that is circulating about a study that Sali Tagliamonte and a student conducted about instant messaging. The good news is that we needn’t worry about IM.

Here’s a word to the wise (AWTTW): Instant messaging (IM), which is often riddled with acronyms like LOL (laugh out loud) and TTYL (talk to you later), is not the spoiler of syntax that some think it is but rather “an expansive new linguistic renaissance,” suggests a new study from the University of Toronto.

Here is the conclusion of an abstract submitted to the New Ways of Analyzing Variation conference in October of 2005:

These findings challenge the deleterious perceptions of IM and suggest that they have been over-blown in the media. Instead, IM is vibrant new medium of communication with its own unique style
(see also Herring 2003, 2004). We will elaborate an argument that IM is an illuminating reflection of
the dynamic ongoing, normal processes of linguistic change that are currently underway in the English
language. Moreover, we will suggest that it may well provide a ‚Äòbellwether of future [socio linguistic]
trends‚Äô (Schiano et al. 2002).

See OMG, its so PC! Instant Messaging and Teen Language.

In the 6th episode of the first season of HBO: The Wire the camera moves from a dead boy to follow a jury-rigged wire across the street through a broken window into the house where Wallace, a teenage drug dealer, and other kids live. Wallace wakes up and hustles the kids who are sleeping on couches and mattresses off to school, handing out a juice box and bag of chips to each that everday morning.

The wire in both the episode, the show, and the cable, is about the connections between people, connections between institutions like the police and drug gangs. It is about the ways they tap into each other’s lives, listening in and learning about the other. The wire the camera follows looks like an illegal tap into the electrical system – a long extension cord providing power to an apartement of kids who sleep in their clothes with Wallace as the closest they have to a parent. This family wire taps illegally into the electrical system, while the police tap into the beepers and phones Wallace and others use to deal. The wire is also a connection between Wallace who called his boss the evening before, when he recognized Brandon, the dead boy, starting a chain of beeper calls, all logged by the police, that led to Brandon being picked up by the enforcers of the gang, tortured and left dead outside as a message everyone in the projects could see.

I noticed that the chidren, as they left for school, all had transparent backpacks. When I lived in Viriginia our children’s public school board was recommending (though not enforcing) transparent backpacks so that children couldn’t smuggle drugs and weapons into middle school. What has become of us when everything is watched and for the convenience of surveillance? I was appalled at the presumption of criminality, the implied fear, and the priority of security over education in what was otherwise a great school in a wealthy town. Why does war and security trump everything?
END_OF_DOCUMENT_TOKEN_TO_BE_REPLACED

The paper I read every morning, The Globe and Mail has twice in the last week (today, Nov. 2, and Saturday past) had a highly designed front page focused on just one story. They are going “layout crazy” where they don’t present the news, but instead try to get attention. Why?
END_OF_DOCUMENT_TOKEN_TO_BE_REPLACED

I don’t normally blog movies I’ve seen, but we just watched Since Otar Left … and it was one of the most touching movies I’ve seen in a long time. It takes place mostly in Tbilisi, Georgia and ends in Paris. The three main characters are a grandmother Eka, daughter Marina, and grandaughter Ada who are dealing with each other, life in post-independence Georgia and Otar, the missing brother of Marina (and beloved son of Eka.) The family are francofiles and Otar has gone to work in Paris where he dies in an accident. Like the movie Good Bye Lenin! (2003), Marina and Ada conspire to pretend Otar is still alive. Unlike Good Bye Lenin! the deception isn’t really about politics, doesn’t descend into farce, and leads to a touching conclusion for Ada. I found the movie dealt well with life in Georgia for an educated family without being about Georgia. It ultimately focuses on three generations of strong women, offering one of the best depictions of an independent grandmother I’ve seen. All three actresses are terrific, but Eka (who, according to the distributor is a “90-year-old former dental assistant and fledgling star Esther Gorintin”) is a character we almost never see in Holywood films.