Do you want more friends for your MySpace presence? The Globe and Mail has an article by Keith McArthur, Trouble making friends online? Buy them (May 22, 2007) about services known as “friend trains” that help people make lots of friends. These services are selling enhanced access so that people can get lots of friends faster. Companies that use Facebook for viral marketing can then get lots of friends who then get their feed.

Obviously you may not be able to buy love, but you can by friends.

Today’s Globe and Mail had a story No more Facebook for city employees (Jeff Gray, May 10, 2007) about how (Toronto) city employees will not be able to use Facebook at work despite the fact that “there is no evidence of rampant abuse”. Toronto seems to be following the province of Ontario which is reported to have banned Facebook as it “does not add value to a workplace environment and civil servants should not be wasting office time visiting the site” according to Premier Dalton McGuinty. Do we have evidence that it is not useful to civil servants? Could there be uses of social networking? At McMaster a number of librarians have Facebook accounts that they are using to be more accessible to students on the princple that they should be where their audience is. (Coming soon a WOW librarian.)

Issues of time wasting hide what to my mind is the more serious issue. Two of my students did a multimedia project on
Facing Facebook that deals with privacy issues. There is a Flash opinion piece that Alex pointed me to that similarly asks, Does what happens in the Facebook stay in the Facebook? These deal with the large-scale corporate privacy issues. My previous post, Facebook Ethics looks at the local ethical issues.

We need to avoid being spooked by a new use of technology just because it takes off. (Toronto is apparently the largest community on Facebook.) But, we also have to be vigilant.

A colleague of mine, Phillip Savage, supervised an interesting student research project into the attitudes of McMaster youth towards broadcast and youth media. A group of upper-class students in his Communication Studies courses surveyed students in a first-year class and prepared a report titled, The McMaster Youth Media Study (PDF). What is impressive is that one of the students, Christina Oreskovich, presented this at the “CBC New Media Panel” to the House of Commons Standing Committee on Canadian Heritage (today, May 10th, 2007.)

Here is their “composite sketch of the typical student” which nicely captures the results:

She is 18 years old in her first year of a liberal arts program, her parents were immigrants and she speaks English and another home language (mostly with her grandparents now). She has a cell phone with a built-in camera and is toying with the idea of perhaps in the summer upgrading to a phone with a built in MP3 player. She got a laptop computer when she started at Mac in the fall and has broadband access at home, and in certain locations on campus. She downloads music for free from the Internet form a range of sites and although she has an iPod she rarely pays for iTunes. She regularly downloads complete TV programs off the web to watch on the laptop but rarely whole movies. Almost every day she catches one or two items from YouTube (usually sent as attachments to electronic messages from friends). She occasionally uses MySpace for social networking. On a daily basis she keeps up to date with over 100 friends from school, home and work on Facebook. Only occasionally does she look at blogs; and she doesn‚Äôt keep one herself ‚Äì though some of her friends do.

She still watches TV ‚Äì usually at least once a day. Her favourite channel is City-TV but she also catches CTV, CBC-TV and CH. She regularly listens to radio (very rarely CBC Radio), although she figures she gets most of her music from other sources. She‚Äôs heard of people getting satellite radio but since she doesn‚Äôt have a car she very rarely experiences ‚Äì it‚Äôs more something her Dad is into. She will read magazines quite regularly, at least once or twice a week.

She doesn‚Äôt feel she has the time or interest to follow most news closely, yet. When she does she is as likely to use traditional mass media (TV, newspaper or radio) as internet sources. She prefers TV, radio nd newspapers for national and international news, and the internet for arts and entertainment stories.

She feels strongly that the Internet allows her to both keep in touch with a wide range of friends, but worries a bit that maybe she is spending less face to face time with close friends and family. She is also a bit concerned about whether time on the internet is making her a little less productive in her school work, although she thinks that it really helps her understand quickly about what‚Äôs going on in the world and exposes her to a wide range of points of view (more so than traditional mass media). She gets worried at time about her own privacy on the Internet, especially when she spends so much time on Facebook. She‚Äôs not really sure if she can find more Canadian information on the Internet versus traditional media. (pages 3 and 4)

I knew Facebook was popular, but didn’t expect it to be this popular. I’m guessing that it is becoming an “always on” utility for many students that aggregates, summarizes and nicely shows what’s happening to their friends. I suspect interfaces like Facebook Mobile will become more and more popular as iPhone type cell phones become affordable.

Swivel is a simple site where people can upload data sets and then graph them against each other. You get graphs from the intriguing like, When Sharks Attack! vs. NASDAQ Adjusted Close, to the serious, as in Monthly Iraqi Civilian Deaths vs. Coalition Military Deaths (seen in picture).

With Swivel you can explore other people’s data, graph different data sets, comment on graphs, and blog your results. It is a clean idea to get people experimenting with data. I wonder how we could provide something like this for texts?

Thanks to Sean for this.

What sorts of graduates does Canada need? Bill Gates in a opinion piece At risk: innovation (subscription required) in the Globe and Mail about a month ago argued for more computer science and engineering graduates arguing that our ability to innovate is at risk. This triggered a response, that Technology’s overrated and that what we need are more business students. Frankly I think they are both wrong, we need social content innovation. The innovations of the Web 2.0 (from blogging and wikis to Flickr and YouTube) are not technical innovations, but content innovations involving innovative ways for groups of people to communicate meaningful content. The areas of growth in information and communications technology are those areas that intersect with creative practices like digital imaging and computer games, as the resport Beyond Productivity points out.

What we need are more arts, humanities and social science students who are comfortable with communications technology and curious to use it in interesting ways. We need what Eugene Roman of Bell Canada calls “content scientists”. Companies like Bell have neat technologies, but need people to find ways to use them to create value. Toys are not enough, people need to play with them to give toys meaning and that is what arts, humanities and social science students do. Imagine a world where we made soccer balls but never organized a game – that’s what Gates, Martin and Milway will leave us with. Instead, as Chad Gaffield, the new president of SSHRC, puts it, Canada should support the human sciences which encourage understandings of people and developing talent.

In the picture above, I am with Gerry De Luca of Bell Canada after a meeting between Bell Canada representatives and colleagues at McMaster where we discussed the problems we face in teaching and research. Can we find an appropriate way for an enterprise like Bell to support the development of talented content scientists? What’s in it for them? This is not an easy problem in the content disciplines as industry engagement carries different risks than in science and engineering. When industry supports research in engineering the site of the engagement is a matter of patentable property ownership that is relatively free of controversy. When industry supports the creation of content it is a matter of copyright or expression, something that resists control or ownership. On the one hand there is too much content making most new content worthless; on the other hand content innovation takes freedom and rarely has a commercialization pathway when free. To support innovative expression you have to be willing to risk the tasteless, the controversial, the political, and the just plain bad. What entreprise would want to be associated with a chaotic explosion of content, even if there were a gem or two? Likewise, how comfortable are universities allowing industry engagement in content science.

The Globe and Mail has a story, Andreessen gets into social networking, on Ning, a “platform” for creating your own social network. It’s like an open FaceBook that lets you create a network for your family or for a class. You can create private or public networks; the public ones are visible and you can join them. You can pay Ning to make money off ads and for other services. Andreessen is, of course, the famous founder of Netscape. (So this is what he is up to now.) 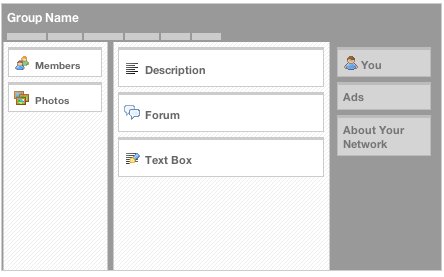 Ning has a nice simple interface for choosing what you want on the portal. You drag the modules you want to the different columns. It lets you see what you can have and lets you arrange what you want.

Web 2.0 … The Machine is Us/ing Us is a great short (4.3 minutes) video on digital text, hypertext and XML. It makes the point about how XML and tagging enrich text with knowledge that can be manipulated in innovative ways. The video does this by showing the editing of text where what is typed is the message and demonstrates the message. This is by Michael Wesch, a Cultural Anthropologist at Kansas State. See the Digital Ethnography group blog his is part of.

This weekend I attended parts of a conference called Deus in Machina | Exploring Religion and Technology in Comparative Perspective that was organized by Jeremy Stolow. The conference started with a great paper by Barbara Kirshenblatt-Gimlett, “Social Sofware and Contemporary Jewish Life” that dealt ways in which new social networking tools are being used to reach out to youth. She talked about the The Open Source Judaism Project and other projects that are supported by ?û?¶?™ ¬ª MATZAT.

So I got a Facebook account. (See Geoffrey Rockwell.) I’m not sure how to use it as a professor – do students really want their profs in their space?

For a good biography of Facebook see the profile by Sid Yadav from Augst 25, 2006 on Mashable.com:

Facebook is the second largest social network on the web, behind only MySpace in terms of traffic. Primarily focused on high school to college students, Facebook has been gaining market share, and more significantly a supportive user base. Since their launch in February 2004, they‚Äôve been able to obtain over 8 million users in the U.S. alone and expand worldwide to 7 other English-speaking countries, with more to follow.