Julia Flanders, Editor in Chief of DHQ, played a great joke on all of us for April Fools. She sent around a message that started with,

DHQ is pleased to announce an experimental new publication initiative that may be of interest to members of the DH and TEI community. As of April 1, we will no longer publish scholarly articles in verbal form. Instead, articles will be processed through Voyant Tools and summarized as a set of visualizations which will be published as a surrogate for the article. The full text of the article will be archived and will be made available to researchers upon request, with a cooling-off period of 8 weeks. Working with a combination of word clouds, word frequency charts, topic modeling, and citation networks, readers will be able to gain an essential understanding of the content and significance of the article without having to read it in full.

On April 1st, 2014, if you went to Digital Humanities Quarterly: 2014 you would have been able to access Voyant versions of the papers of the recent that are there. Stephen Davis on the TEI list logically took it a step further and wrote that he had processed the message itself through Voyant and that the “derived Cirrus word cloud really does say as much (as) anyone need to know about DHQ’s new approach!” Alas the word cloud wasn’t included, so I generated one and here it is. 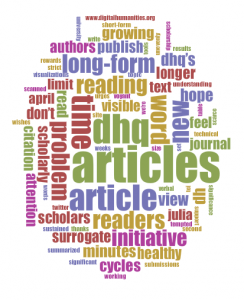 What else is there to say?