Stan pointed me to the inaugural issue of the Journal of Virtual Worlds Research which has a number of fine articles.

These two pieces make an interesting contrast since Benedikt focuses on space and Bell manages to define virtual worlds without any reference to space. Benedikt calls for architects to engage in the design of virtual spaces while Bell focuses on the network of avatars – or the people within the space (and persistent time.)

Ever since the Gartner press release saying that “80 Percent of Active Internet Users Will Have A “Second Life” in the Virtual World by the End of 2011″ there has been a renewed interest in virtual worlds. My sense is that the 1990s interest in virtual reality was overblown and ultimately wrong in that people predicted we would be manipulating information inside virtual worlds with VR interfaces, data-gloves, headsets and so on. What has emerged instead is the proliferation of massive multiplayer online environments from games like World of Warcraft to social/creative spaces like Second Life. The headsets and torture apparatus of Lawnmower Man are gone, thank you! 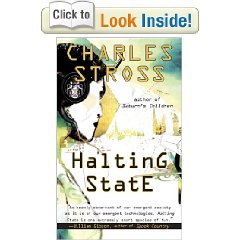 So … what is next? I’ve just finished Halting State by Charles Stross which is a near-future detective story set in Edinburgh where players can move their avatars from game to game in the Zone (something actually proposed by Linden Labs and IBM – see Lohr Free the Avatars – this reference is from the Messinger, Stroulia and Lyons article “A Typology of Virtual Worlds” in the JCWR.) What is more interesting is the way Stross imagines the overlay of virtual and real worlds. Everyone, including cops, wear glasses that provide augmented reality views on the world they walk through, including the ability to see people in their in-game avatar representation while, for example, at a trade fair. Stross does a imaginative job or weaving the virtual into everyday life. (If you like this book you should also read Accelerando – a great accelerating run through the artificial life as it leaves meat behind.)