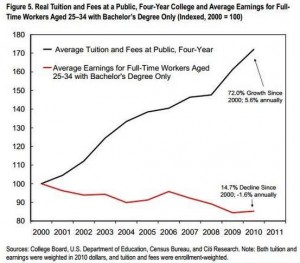 Clay Shirky has another essay on MOOCs titled, How to Save College. This essay from February 7th is in the Awl. He makes a couple of important points:

As I’ve mentioned before, I’m less convinced MOOCs will make such a difference, but do think that rising costs will lead to more and more people trying alternatives (of which MOOCs are only one.) The cost issues is also very different outside of the United States in countries that don’t have super expensive private colleges. In Quebec, for example, tuition is below $3,000 a year. Student protests have made it very difficult for governments to raise tuition. It is hard to imagine students choosing MOOCs that cost almost as much once you add all the course fees. Instead MOOCs will probably just be woven into public university education as a way of cutting costs so you will end up with more or less the same education.

The good news is that there is renewed interest in education which is important to education. Even better is that people still want to learn whether through MOOCs or college or reading books. Even if MOOCs turn out to be no better than reading a how-to book we should still welcome any addition to our collective knowledge and learning opportunities.