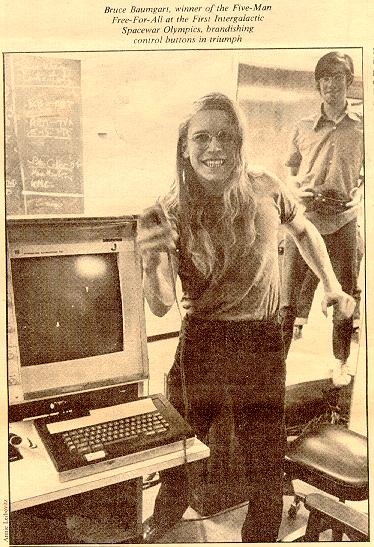 Reading I came across a reference to an influential early article in the Rolling Stone of 7 December, 1972, titled SPACEWAR – Fanatic Life and Symbolic Death Among the Computer Bums. The article is by Stewart Brand and it describes Spacewar and the culture around it:

Reliably, at any nighttime moment (i.e. non-business hours) in North America hundreds of computer technicians are effectively out of their bodies, locked in life-or-Death space combat computer-projected onto cathode ray tube display screens, for hours at a time, ruining their eyes, numbing their fingers in frenzied mashing of control buttons, joyously slaying their friend and wasting their employers’ valuable computer time. Something basic is going on.

Rudimentary Spacewar consists of two humans, two sets of control buttons or joysticks, one TV-like display and one computer. Two spaceships are displayed in motion on the screen, controllable for thrust, yaw, pitch and the firing of torpedoes. Whenever a spaceship and torpedo meet, they disappear in an attractive explosion. That’s the original version invented in 1962 at MIT by Steve Russell. (More on him in a moment.)

The article goes on to describe the Hackers involved in playing and developing games as “A mobile new-found elite, with its own apparat, language and character, its own legends and humor.” It talks about ARPA,  Xerox PARC, Alan Kay’s work and Pam Hart and Resource One. You can feel Brand inventing a compute counterculture by describing it as being. See Chapter 4 of Fred Turner’s From Counterculture to Cyberculture,

In “Spacewar,” Brand brought together two visions of personal computing and linked them in terms set by the New Communalist technological vision. The user-friendly, time-sharing vision of Xerox PARC and the politically empowering, information-community vision of Resource One were two sides of the same coin, Brand implied. Both groups, he suggested, were high-tech versions of the Merry Pranksters, and the computer itself was a new LSD. Drawing on the rhetorical tactics of cybernetics, Brand offered up Xerox PARC, Resource One, and the Merry Pranksters as prototypical elites for the techno-social future. He allowed each to claim some of the cultural legitimacy of the others: in his feature, Resource One appeared to be not a fringe group of ex-hippies but a central player in a new computer movement. Xerox PARC, while still a child of the military-industrial complex, took on the cool of the Pranksters. And the Pranksters and Brand himself, six years after the Trips Festival, demonstrated that they had survived the Summer of Love and should still be regarded as harbingers of social change.

Even before minicomputers had become widely available, Stewart Brand had helped both their designers and their future users imagine them as “personal” technologies.