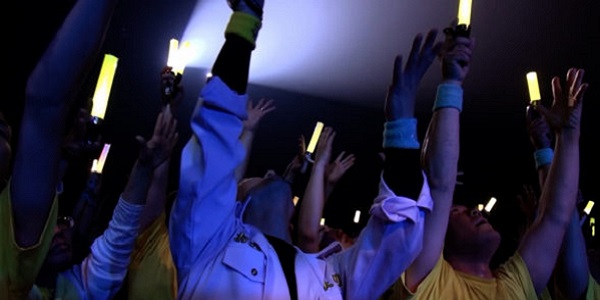 Tokyo Idols (2017) is a fascinating look at the idol culture in Japan. Directed by Kyoko Miyake it mostly follows an older (19) idol called Rio and her fans. The documentary confronts the creepiness of older men who find it too much work to have real relationships with women, but also shows their vulnerable side. These men spend all their savings on following idols and it gives them a sense of belonging. Miyake shows how the men (and some women) form fan clubs and follow their idol. It shows the constrained hand-shake meetings and photo opportunities that they pay for. It makes the connection to otaku culture and Akihabara.

The documentary nicely shows what it is like for the hard-working idols. For Rio it is a full time job, she has to practice, she has daily live sessions on the internet and she even packages up the schwag she sells. She even goes cycling around Japan (with live internet connection?) in order to connect to fans outside of Tokyo and to try to boost her popularity. As this TOKYO IDOLS review points out, you can’t help rooting for her.

What the documentary doesn’t cover much is the big idol stables like AKB48. Rio manages herself, but most idols are managed by professionals. I would have liked to learn more about that side of the business.