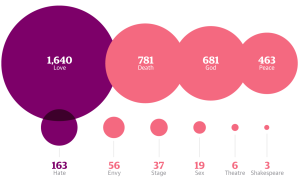 The Guardian published an article on What’s in a number? William Shakespeare’s legacy analysed (April 22, 2016). This article is part of a Shakespeare 400 series in honour of the 400th anniversary of the bard’s death. The article is introduced thus:

Shakespeare’s ability to distil human nature into an elegant turn of phrase is rightly exalted – much remains vivid four centuries after his death. Less scrutiny has been given to statistics about the playwright and his works, which tell a story in their own right. Here we analyse the numbers behind the Bard.

The authors offer a series of visualizations of statistics about Shakespeare that are rather more of a tease than anything really interesting. They also ignore the long history of using quantitative methods to study Shakespeare going back to Mendenhall’s study of authorship using word lengths.