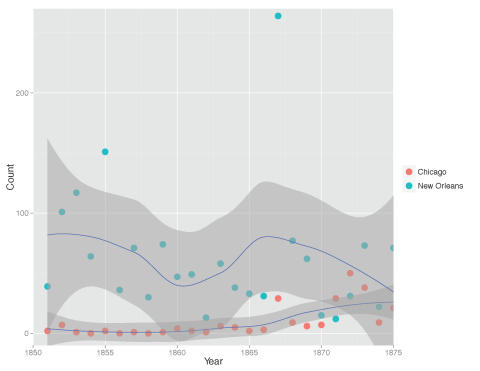 Matthew Wilkens has posted a nice blog essay about his short MLA paper on geography and memory, Literary Attention Lag. He looked at how some cities get far more literary attention than their population merits despite a general correlation between population and attention. For example, in 1860 Chicago and New Orleans had about the same population, but New Orleans gets a lot more attention.

What is particularly useful is that he provides an iPython notebook with a documented version of his code here. He also provides a link to his data so you can edit and recapitulate his study.

Stéfan Sinclair and I are experimenting with Mathematica notebooks and iPython notebooks as a way to share research thinking with code woven in.