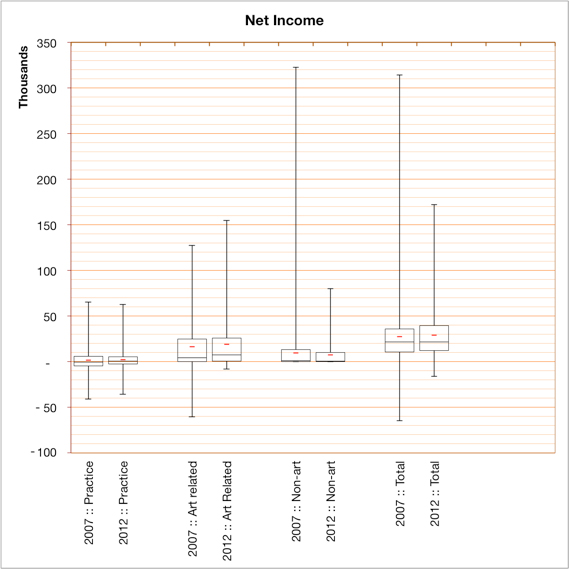 The agYU (Art Gallery of York University) has posted a summary comparison of how much artists made in 2007 and in 2012. See Out There – Waging Culture: Snapshot comparison of 2007 to 2012 results. There hasn’t been a lot of change in the bottom line for artists (they still don’t make much.) What is depressing is how little the average arts practicioner makes from their practice. The mean for 2012 is $2,300 a year (after expenses.) Most artists are surviving from art-related income. Even then, the 2012 mean for practice and art-related income is $21,490.

In a different blog entry on Methodology in Short they talk about the purpose of the Waging Culture survey,

There are some significant issues with using Census data in researching visual artists. As the Census accounts only for the “main” occupation of an individual, those artists who hold day-jobs are not counted as artists, and thus a significant set of artists simply disappear into the need for simplicity in defining occupation. In addition, there is no breakdown of the various source of incomes for those who are identified as artists. In both instances, these lapses can and do lead to significant misunderstandings of the socio-economic health of artists. For example, while the median income of artists in the 2007 study was $20,000, this included income from all sources. Income from studio practice alone, however, was negative $556.