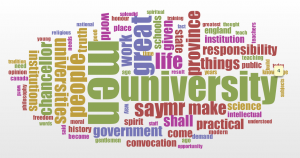 Here at the University of Alberta we return for inspiration to the founding President’s words at the 1908 Address to the First Convocation. In particular we have taken to heart Henry Marshall Tory’s words about “uplifting the whole people.” Here is the relevant paragraph,

In many of the older universities men of merit were deprived of the privileges which they offered sometimes by creed or class legislation. The modern state university has sprung from a demand on the part of the people themselves for intellectual recognition, a recognition which only a century ago was denied them. The result is that such institutions must be conducted in such a way as to relate them as closely as possible to the life of the people. The people demand that knowledge shall not alone be the concern of scholars. The uplifting of the whole people shall be its final goal. This should be the concern of all educated men, it be never be forgotten.

The phrase “uplifting of the whole people” has become the promise of the University though I doubt many of us think about it more than casually. In Tory’s address it is connected with nation building and civilization. Every state in the USA has a university, now every province in Canada will get one. The state university has a special responsibility to the people. There is also a strong thread of praire populism to the address. He recognizes that universities have excluded people and been sites of privilege, something to be corrected in the “modern state university” that lists to the demands of the people and relates to them.

Tory touches on a number of other issues in his talk that we should also think through. He talks about the importance of pure intellect to the university. He connects this with “the highest ideals of life.”

[Universities] have arisen as a result of the demand of the intellect pure and simple. Quite apart from practical results, the restless energy of the human mind, slow to accomplish results, but never resting in its efforts, has demanded that a place should be found where men may be given an opportunity to fit themselves by rigid training to solve the problems of life. Thus it has become the task of the university to hold up the highest ideals of life; to help create in the hearts of men and to sustain in them a love for those things which are higher than food and raiment; to emphasize the teaching of the greatest of all teachers that man’s life consisteth not in the abundance of the things which he possesses. It has become a part of their recognized responsibility to instill a love of those things which really constitute greatness; to emphasize the things of the mind above those of the body; in relation national life to place patriotism above party; in our relations to others to place love above hate; in our relation to knowledge to choose truth and not error; in our relations to ourselves to be men not things.

He returns later to these high ideals which turn out to be echoed in the “moral and spiritual sense of the Christian world” which has triumphed over materialism. The university is to be a place that fosters ideals that are consistent with the Christian world and not a “materialistic philosophy.”

Did I say materialism was dead? I say it again! Man knows that he is greater than the clod and in that knowledge lies his supremacy. The age of thought has only begun. In spite of the practical and materialistic philosophy which expresses itself still [in] the commercial spirit of the age I assert the deepest conviction of my being that thought and mind are still supreme. We who teach may be called idealists. Let me say to you that the idealist still lives and lifts his head to the stars and declares the impossible can be accomplished. All the ages of progress have been his ages and when the spirit of a material age is dead and the philosophy of materialism is forgotten the idealist will still be conquering the world.

Tory touches on the importance of faculty and admonishes that faculty not be treated as “state officers.”

The members of the university staff must not be thought of in the ordinary way as state officers. They must rather be regarded in the light of independent thinkers and scholars who are to bring us into that appreciation of those higher things about which I was speaking a moment ago.

He then goes on to talk about teaching and giving faculty the freedom to teach well. He trusts us to handle this freedom with discretion.

Our professors are first of all teachers. To them the largest freedom must be given. It is their duty to push into the heart of things that the truth and nothing but the truth may be, discovered. I am sure they will temper freedom with discretion.

While on the whole the address is remarkably current there are two dated and distasteful aspects. First of all is the sexism of the language that talks only of men and manhood. There is no recognition that women might be part of the whole people. I hear the echo of muscular and rational Christianity in this address. Secondly there is a race consciousness or pride in Alberta’s youth and mingling of peoples that strikes me as vanity.

We are not a degenerate race, we are a race produced by the mingling of the best blood. We are not yet dissolute in temper, but still have the firmness to govern and the grace to obey. We are rich in the inheritance of honour bequeathed to us through a thousand years of noble history and we may make it our daily thirst to increase it with splendid service, so that if it be a sin to covet honour, Canadians should be the most offending souls alive.