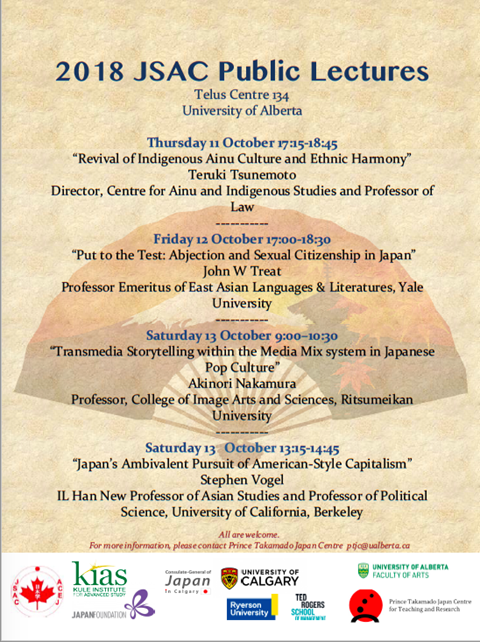 Today I had the honour to introduce Professor Aki Nakamura from Ritsumeikan University who talked about Transmedia Storytelling within the Media Mix system in Japanese Pop Culture at the JSAC 2018 conference in Edmonton.

He began by introducing us to transmedia storytelling. He talked about how transmedia franchises can extend the fictional world through space and time.

The investment of the fans has positive and negative effects. Fans can get angry or lost in complex franchises. They can object to a storyline or representation.

He then compared Western transmedia franchises to the Japanese idea of “media mix”. For Japan the story doesn’t need to be consistent. They want to surround consumers with lots of “touch points” which allow them to enter the world. He gave the example of Yokai Watch and he talked about the history of media mix in Japan going back to comics like Lighthearted Father (1922), Edo Kids Ken-chan (1936), and Norakuro (Stray Black Dog). It could be said that Astro Boy (1952) was the first media mix, but Nakamura believes it starts with Kamen Rider (Masked Rider) in 1971 with a deliberate studio attempt to create a mix of media around a character. They had a TV drama, a manga, toys, snacks with cards, figures, and finally a live action show.

He then talked about a case study – Gundam, 1979. (Edmonton was featured in a recent Gundam animation.) He talked about how the sponsor’s desires changed the development of the Gundam idea to include robots that can be toys. Initially Gundam was a failure with kids but older teens revived it by asking for plastic models. it became a social phenomenon in 1980-2. Eventually it became hard for new people to enter the world so they developed a whole new series. Alas that failed, but a separate SD Gundam series did take off. They adapted Warring Period and King Arthur stories to Gundam. The lesson was not to try to add consistently to the story, but to start entirely new storylines that borrow ideas. G-Fighter and Gundam Wing are completely new worlds only loosely connected.

Games allowed all the Gundam Worlds to be brought together. The prime focus was to please existing fan base. They also began to experiment with VR and other new technologies. They had some failed animations, but they could always go back to winning ideas. The sheer variety of assets allow them to always go back to other storylines if needed.

Nakamura closed with a discussion of some of the business lessons. He talked about the need to bring in new professionals when running a long term franchise and the need to get collaboration between the professionals. In the case of Japanese mixes they often also bring in interesting doujin (fan) artists. The SD Gundam was an idea from a doujin.