Last week we organized Replaying Japan 2014 here in Edmoton. This was the second international conference on Japanese game studies and the third event we co-organized with the Ritsumeikan Center for Game Studies (in Japanese with English pamphlet).

The opening keynote was by Tomohiro Nishikado, the designer of Space Invaders – the 1978 game that launched specialty arcades in Japan. He talked about the design process and showed his notebooks which he had brought. Here you can see the page on his notebook with the sketches of the aliens and then the bitmap versions. I kept my conference notes on his talk and others here. 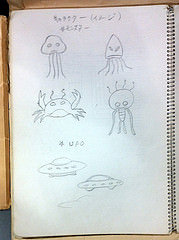 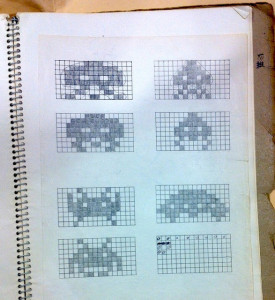 The conference was a huge success with over 100 attendees from 6 countries and over 20 universities. We had people from industry, academia and government too. We had a significant number of Japanese speakers despite English being the language of the conference. After the conference we met to plan for next year’s conference in Kyoto. See you there!

This conference was supported by the Japan Foundation, the GRAND Network of Centres of Excellence, the Prince Takamado Centre, the Ritsumeikan Center for Game Studies, CIRCA, and the University of Alberta.