Victoria led me to this 1966 form for a student computerized dating service called “Cupid Computer.” You can see the form in context in the University of Waterloo student newspaper, Coryphaeus. See 1966-67_v7,n09_Coryphaeus. Click to read and page forward and you will see the two page insert with the questions you have to answer and send in. Here are some examples. 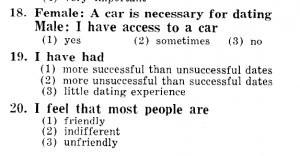 The Cupid Computer service was apparently “run by students” and would, for $3 give you a list of 3 scientifically compatible dates. They mention using an IBM computer and that the Computronics Company is “The Leader by far in Canadian Computer Dating Systems”. The PDF of the insert (and cover page) is here, 1966-67_v7no9_Coryphaeus.

It is worth noting that this was a student developed service. While serious university computer centers were doing other things, students were developing their own social uses of computers … and long before the web.