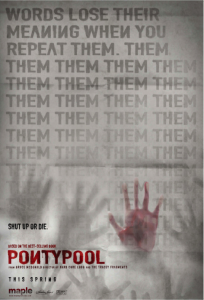 Last night I watched a Canadian gem of a zombie movie, PONTYPOOL | Shut up or die. The movie takes place almost entirely in a radio studio in the basement of an old church in the small town of Pontypool Ontario. Grant Mazzy, a talk-radio host at the end of his career, exiled from the big city, stays on the air dealing with the eruption of a language plague where English words (primarily endearments like “honey”) carry the new type of virus that infects people. With his producer and technician they try to figure out what is real or not as strange reports come in and they are interviewed by “our affiliate” the BBC. Eventually the zombies, who follow the sound of speaking, repeating words or phrases, break in to try to eat their way to the voice. Grant and his producer figure out that talking in their poor French (remember the importance of bilingualism in Canada) is one way to avoid infection and they work out a cure which involves disrupting mean by asserting things like “kill is kiss”. Back on the radio to talk through the cure, the movie ends with a count down from 10 in French from off camera. Are the French Canadian troops sent in to eradicate the plague about to blow up the radio station just when they have figured out the cure? Was the talk show of the radio station the source of the plague in the first place or was it the posters for a lost cat “Honey” plastered all over town? Could the interview Grant gives to a BBC news announcer have spread the logorrhea abroad? Can words spread ideas (or memes) like a plague closing down our understanding until we are babbling zombies. After all, in the beginning was the word, not its understanding.

Talking of how zombie movies are often a metaphor for things we fear infection from like communism, the author of the screenplay and original book, Tony Burges, says about the movie that,

(a zombie is) really a metaphor for metaphors that keep hunting you long after they have been meaningful. They keep coming at you. … They’re figures of speech that become predatory long after their sort of meaning as figures of speech have sort of left the stage. And so … that for me is the interesting last hundred yards of a zombie’s life. (From an interview with Tony Burgess in December of 2008 at the Drake Hotel in Toronto. Interview by Ian Daffern, co-produced and edited by Tate Young of Vepo Studios.