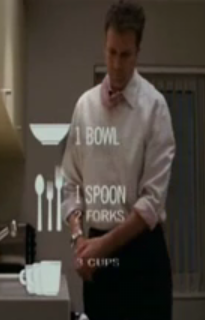 I just found that someone has posted on YouTube the introduction to the movie Stranger than Fiction where, with Emma Thomson’s voice narrating, we see Will Farrell’s accountant character’s life surveyed with an overlay of explanatory graphics. I’m not sure what to call the graphics – they sometimes look like a visualization of what Crick (the character) thinks about as he walks and counts. They sometimes seem to document aspects of Crick’s life, like how many items he puts in the dishwasher each night or how he ties his tie. They behave like augmented reality information graphics meant to add information for the viewer, but information that has the character of the character.

According to information aesthetics the infographics were developed by the MK12 Tactical Design and Research Bureau. Now if life had an interface, I’d like it to be stranger than fiction.